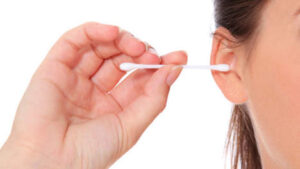 A healthy ear canal should contain ear wax. Without ear wax some dirt like dead skin cells will remain in the ear. In addition, ear wax protects the ear from dust, bacteria and fungi. But occasionally, ear wax causes problems. For example, when wearing a hearing aid, ear wax is usually pushed to the rear of the ear canal together with the earpiece where it remains behind the earpiece and thickens into an lump of ear wax. How do you deal with this?

Removing an excess of ear ax from the ears

Only ear wax that is visible in the opening of the ear canal should be removed. This is done best with a cotton swab. As a guide, the cotton wool tip must remain entirely visible. This reduces the risk that you go too deep into the ear and push the ear wax in deeper. With only circular movements the entrance can be cleaned. Giving in to the urge to clean the ears deeper clean is absolutely wrong. Cleaning the ear canal in another way than nature does, entails the potential risk of damaging the vulnerable skin, after which an infection can occur quickly. Often, the ear wax is also pushed in deeper into the ear canal pushed instead of removed.

Disruption of the production and disposal of ear wax

Ear wax (cerumen) is made in 1,000-2,000 ear wax glands next to the hair in the entrance of the ear canal and forms a mix sebum, hair and keratin (skin component). The most common wet ear wax changes in color and consistency the older it gets; from ‘creamy’ goldish yellow dry ear wax-flakes, through a stage of sticky brown ear wax to hard dark (black) grainy ear wax.

Ear wax should only be in the outer part (near the exit) of the ear canal, where it is made. The skin of the ear canal is slowly renewed from the eardrum (spiral-shaped) towards the exit of the ear canal and in this way it takes the ear wax with it outside (like a glacier).

In addition, the jaw joint – which forms part of the outer lower part of the ear canal – by way of chewing movements, yawning and talking massages the granules of ear wax towards the exit of the ear canal. Normal body hygiene (washing the ears with water; showering) does the rest. A healthy ear canal has a balance between the production and disposal of ear wax.

Surely when wearing earpieces, skin care is very important to prevent problems. A few times per week a drop of oil to protect the skin can be very pleasant.